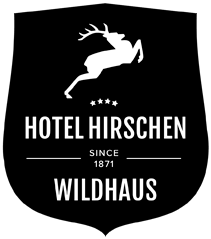 With the marriage of the factory owner's widow Verena Walt-Klauser to Niklaus Ammann, the local community magistrate and innkeeper of the Hirschen, the ongoing ownership of the Hirschen by the Walt family began in 1860. In 1856 Niklaus Ammann had had the modest inn in the middle of the village of Wildhaus extended. Two original conditions had to be fulfilled: The municipality had the right to claim a chamber on the 3rd floor as a place of detention. And for 10 years the telegraph administration had to be provided with a premise to use as an office – free of charge.
The post office was also located in the Hirschen inn. The stable was populated by 15 horses for the horse-change of the stagecoach in Wildhaus. The concessionaires of the horse-drawn carriage were the Hirschen inkeepers.

The stepson of Niklaus Ammann, Arnold Walt, joined his stepfather's business after his marriage in 1871 and managed it from 1875 on his own account. For 12 years he also served as a community magistrate and was the founder of the Wildhaus water supply and of the whey fasting cures. He was also a member of the St.Gallen Grand Council and as a captain in the military, he experienced the famous demobilisation of the French Bourbaki army.

Stefan Walt had originally opted for a postal career and was a postal clerk in St.Gallen. After the early death of his brother Arnold (1897) he came into the Hirschen, leased the hotel in 1907 for two years and inherited the whole business in 1909 after the death of his mother Lina.

Arnold enjoyed thorough training as a merchant with Sandoz in Neuchâtel, the Bellinzona Cantonal Business School, and in a Belgian wine shop and a Brussels bank. This was followed by training at the Hotel Management School in Lucerne. His brother Rudolf was also trained as a hotelier at the Belvoir Zurich Hotel Management School and from 1942 both brothers managed the Hirschen together as partners. Until his death in 1969 Rudolf, who remained unmarried, mainly took care of the management of the dancing club opened in 1959.
In 1934, the hotel underwent a major renovation and gained 34 additional guest beds on three floors, which was combined with a spectacular relocation of the entire building. At the same time, the most modern canteen kitchen in the area was installed in the hotel. In 1949 the hotel was severely affected by the extension of the state road, which meant that the «Chalet» had to be relocated. This resulted in additional technical rooms and parking spaces. In 1959 renovations consisted of the demolition of the oldest central part of the building, of the relocation of the western part and the construction of an entire new wing with reception/office, lift, dancing club, restaurant, and bar.

Arnold Walt completed a thorough training as a hotelier and various internships at the Suvretta-House St. Moritz, Grandhotel Regina Grindelwald, Bahnhofbuffet, and Glärnischhof Zurich. From 1957 he worked abroad in England and Canada until he joined his parents' business in 1968. He was founder and president of Sportbahnen Wildhaus-Sonnseite AG, co-founder of the Toggenburg-Rheintal-Liechtenstein section of the Swiss Hotelier Association and from 1976 board member and vice-president of HOWEG, purchasing cooperative of the Swiss hospitaly industry.

The renovations of 1969 provided the Hirschen with an indoor swimming pool (the first in the region), with the discotheque «Pferdestall», a hairdressing salon, a ladies' boutique and a store. Additional seminar rooms were also created at this time. In 1973 the wing built in 1959 was extended and 9 more hotel rooms were added. In 1976 it was the turn of the annex building to be renovated. In the chalet 6 double rooms were renovated and in 1977 the east facade was renewed. The standard of comfort of the hotel rooms was improved by the installation of bathrooms in order to meet the demands of international guests. In 1986 two bowling alleys followed, the Dancing James' Club was opened, and in the place of the former wine cellar a wine store was established, which is used under the name «Säumer Station» today. In 1991 the Restaurant Dorfstube was enlarged and appointed with old wood to become the cozy, homey restaurant it is today.

Unfortunately Arnold Walt died early, so that Susanne Walt took over the sole management of the hotel in 1996.

Another stroke of fate was the devastating fire on 28 April 2001, which destroyed the «Old Hirschen», the popular panoramic hall, the indoor swimming pool and the shops. The authorities showed themselves to be very cooperative, so that the stricken Hirschen received the reconstruction permit within a short time. The new building was equipped with spacious seminar rooms, which can also be used for parties and banquets. On the 2nd floor, 9 spacious double rooms of over 25m² were built, two of which are handicapped accessible. The upper floor under the glazed gable roof was converted into a wellness area, and on 21 December 2002, after only 14 months of construction, the opening of the new building was celebrated with an open house day. The interest of the population was great, as 500 visitors came to get to know the new Hirschen.

Simone, the eldest of the four daughters, joined the company on 1 May 2006. From then on Susanne Walt and Simone Müller-Walt ran the family business together. In June 2010, Simone completed her training as a Swiss hotel manager in postgraduate studies. Since Simone joined the company, the rooms have been continuously adapted to today's needs. The west parking lot was renovated and free WiFi was installed in the hotel.

Under the motto «Preserve the old and enrich it with the new», Simone Müller-Walt took over the management of the Hirschen on 1 September 2013. Susanne Walt remains in an advisory and supporting function.

Since November 2014, Simone's husband Michael Max Müller has also been an active part in the management of the hotel Hirschen. As director, he had previously managed the traditional 4-star Edelweiss Hotel in Sils Maria successfully. Together, Simone and Michael will set new accents and at the same time continue the long-standing tradition of Hirschen hospitality.